CHEESE OF THE MONTH FOR AUGUST: SMOKED GOUDA RESULTS

This was my first Cheese of the Month Challenge and it looks like I was the only one to participate, which is fine. If you want to participate go here to read how: http://adventuresingluttony.blogspot.com/2008/07/cheese-of-month-challenge.html

Here are my results:

I chose Smoked Gouda because my daughter, Baby Bell, loves smoked cheeses. She may get her looks from her dad, but she gets her good taste in food from me! I chose two recipes to try out. The first was a muffin recipe and the second was a crockpot chicken recipe.

Well, I'm a HUGE fan of muffins, so when I found this random muffin recipe that included smoked gouda and tomatoes (which are Bell's favorite), I knew I had to try them out. The muffins were call Smoked Gouda and Scallion Muffins, and the recipe seemed simple enought.

I followed the directions and everything seemed to be going well... 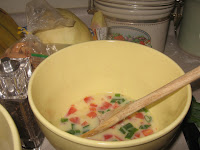 I put them into the muffin pan. This recipe made 12 servings. 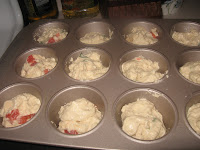 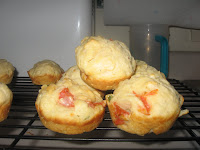 Baby Bell seemed to like them. She ate TWO whole muffins!!! She threw the third one on the ground, so I dusted it off and gave it to my husband to try. Yeah, I know that is mean but that's what he gets for taking a nap while I'm trying to bake with a screaming toddler at my leg!!! 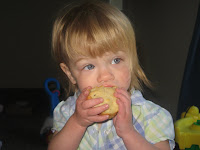 I ended up eating three of them just to make sure that I DIDN'T like them. They ended up being very bland. It tasted like a muffin, but all of the good flavors of the cheese, tomatoe, and onion didn't seem to mix throughout the muffin. I will definitely make these again, but I will change it around to see if I get make it taste like something!

I give this recipe: One Smiling Cheese Guy out of a possible five. 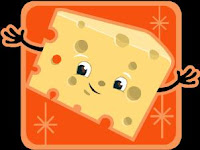 (Just in case you wanted to check it out.)

Next, I found a crockpot recipe. Being a mother of toddler, I am very busy. So, I love crockpot recipes. I think food taste better, too, when it has been slowly simmering all day. Don't you?

The recipe was called Crockpot Chicken Pasta with Smoked Gouda. It was very easy to throw together. My only complaint was you only threw half of the ingredients together and add the other half at the last 20 minutes of cooking. Besides that it was fairly good and everyone ate it. However, I think it was missing something. I thought that maybe it could have used some sort of kick to it. I'm thinking onions...maybe some spinach or peppers would have been nice. This will definitely go on the recipe card to be made in the future, but with some moderifications. 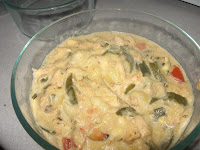 I found the recipe here http://www.recipezaar.com/287606 in case you're interested.

Posted by Adventures in Gluttony at 9:48 AM

Labels: Cheese of the Month 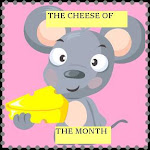 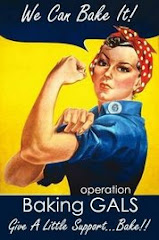 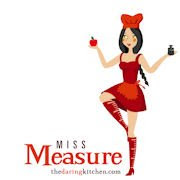